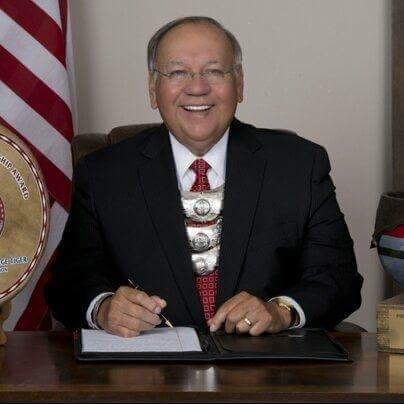 Topic:  Tribal Economy is for everyone

Chief Tiger was elected to the National Council in 1991 and served in that capacity a number of terms and elected as a Speaker in 2006-07. He was elected as Principal Chief in 2011 and Inaugurated in January of 2012.

Following his strong belief that tribal members are the nation’s most valuable resource a plan was developed during a Strategic Planning Session with input from tribal elders, citizens, Creek chartered communities, elected tribal officials, traditional church and ceremonial leaders and employees. A plan without outside consultations was the basis in prioritizing Health, Economic Development, Land Acquisition and Education. Within two years there was improved and comprehensive health care with emphasis of moving away from failed federally mandated health care, expansion of economic development through diversity, expanding land base, expanding and enhancing education resources for all levels of education. Within a short period of time in his administration, the plan’s goals and objectives were aggressively addressed and achieved with support of the tribe’s National Council.

He has been recognized for his leadership by respected national, state and, local organizations by naming him as Tribal leader of the year due to the Tribe’s progress in various facets of its government and economic development programs.

Former Chief Tiger continues his work as an advocate for Tribes and Indian organizations. Whether it’s serving on National, regional or state boards he remains active. Recently, he was elected to another term as Chairman of United Indian Nations of Oklahoma, Kansas and Texas, a regional inter-tribal organization.