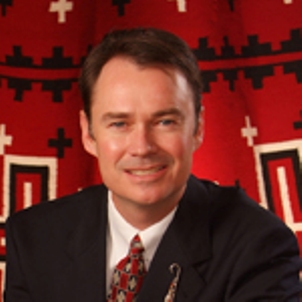 McBride has more than two decades of experience and chairs Crowe & Dunlevy’s Indian Law & Gaming practice group. He has been recognized by Chambers USA in Band 1 for Native American law and as a Star Individual. McBride has also been named in Oklahoma Super Lawyers for Indian law, gaming, political law and business litigation. He is recognized by Best Lawyers in America for Native American and gaming law and is A-V rated by Martindale-Hubbell.

McBride serves as general counsel for Comanche Nation of Oklahoma, Thlopthlocco Tribal Town, Attorney General for Seminole Nation of Oklahoma and litigation counsel to Citizen Potawatomi Nation. As one of only two Oklahoma general members of the International Masters of Gaming Law, he serves as the organization’s Treasurer.

He has authored more than 50 published articles and represented more than 20 Indian tribal governments/entities, as well as corporations and individuals doing business with tribes. Additionally, he is a former Justice for the Pawnee and Kaw Nation Supreme Courts, a federal adjunct settlement judge, an adjunct law professor and lecturer to numerous law schools. He has also served as National Director and General Counsel for the Federal Bar Association. McBride is a graduate of Trinity University and the University Of Oklahoma College Of Law.