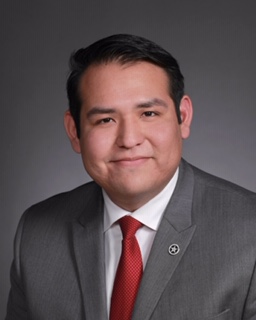 As Executive Director of American Indian Education at OSDE, Julian is a tireless advocate and K-12 education policy leader working to further the educational opportunities for over 130,000 American Indian students in Oklahoma public schools.

In his role, he manages educational collaborations between tribal nations and school districts throughout the 77 counties of Oklahoma. He works to ensure school districts improve their tribal consultation practices, assists tribal educational agencies in their connection to the State Department of Education, and has expanded the Office of American Indian Education from a team of one to six total within his first year as Executive Director through a college and career readiness NYCP grant.

Julian has worked in the nonprofit sector with tribal education departments as associate director for the Tribal Education Departments National Assembly (TEDNA). In addition to his full-time duties, Julian also serves his tribal nation as an appointed Gaming Commissioner for the Comanche Nation Gaming Commission (CNGC) since April 2017.

Whether in his work at the state capitol complex, volunteering on weekends for the OKC YMCA Youth and Government Program, or conducting regulatory business for the Comanche Nation; Julian is a fervent believer in the future of American Indian Education for all. John’s tribal affiliation is Comance & Kiowa.